After The Fat Lady Sings

Financial journalists across the globe were both surprised and puzzled recently when they heard Christine Lagarde using a strange expression. "You know, it's not over until the fat lady sings, as the saying goes," she told bemused reporters at a press conference in Manilla. Which fat lady, and what does she sing must have been questions going through the heads of many of those present.

Further investigation would have lead them to discover that far from this being some new piece of feminine wisdom that the IMF DG wanted to transmit, the phrase in fact comes from the rather male world of business deals and contact-sport-commentators and is generally used to describe closely contested matches, or deals which won’t be struck till the final offer is actually made.

Ms Lagarde naturally had other things in mind. She was referring to the state of negotiations surrounding the latest Greek bailout review, prior to the handing over of that long awaited 31.5 billion euro tranche the country so badly needs to meet its ongoing commitments. The curious thing about the holdup in this case is that it isn’t the result of a stand-off between the Troika and the Greek government.  Last week the Greek parliament passed the final set of budget decrees required by the international lenders to enable the transfer. 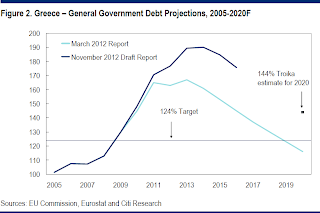 No, in this case the dispute is an “internal affair” between the rival parties which make up the Troika, and in particular between the German government and the IMF. The issue is how to leave Greek finances having at least the appearance of being on a stable and sustainable path, which in this case is defined as attaining a sovereign debt level of 120% of Greek GDP come 2020. Delaying the country’s fiscal objectives by 2 years effectively means putting back the theoretical attainment of that objective by the same amount of time - until 2022. Jean-Claude Juncker was willing, but the IMF is digging its heals in. Any new agreement, Ms Lagarde said as she left Manilla en route for Tuesday’s Brussels EU finance ministers meeting, should be "rooted in reality and not in wishful thinking.” Tut tut, Mr Juncker. 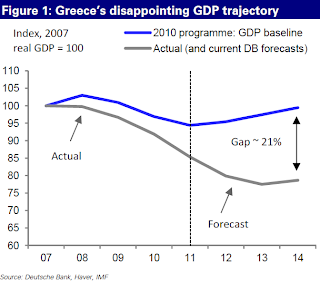 So whence this sudden hardening in the Funds position? Well, it may be just a coincidence, but the US elections are now over. Barack Obama need not now preoccupy himself with what a hypothetical exit by Greece from the Euro would do for his campaign. Non-European members of the Fund have long been chaffing at the bit over the extent of the “kid gloves” treatment so many apparently rich countries have been receiving, and have been arguing for a much more independent and tougher approach. Now with the US starting to shift its ground the balance of opinion has clearly changed.

Greece’s debt is evidently on an unsustainable path however you look at it. Just getting through to 2020 isn’t enough, since the following decade is going to be very challenging demographically for the struggling country. Greece needs either a much more substantial reduction in its debt levels, or a negotiated exit from the Euro. 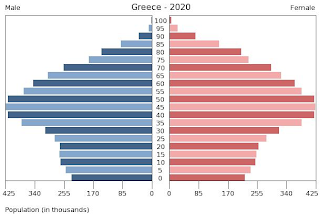 Realists are now pushing this view, but realists are also pragmatic people, they recognize that Angela Merkel has elections looming in the autumn of 2013, and that she can only go so far at this point. So it is simply the principle of the thing that needs to be established now. We can all get down to the real details once Greece fails another review, possibly towards the end of 2013. What Christine Lagarde did make clear in Manilla is that being “rooted in reality” means is that the best way countries in the Euro Area can send a strong and credible signal they remain committed to Greece’s continuing Euro membership is by agreeing in some way shape or form - the formula doesn't matter - to reduce the debt Athens owes them.

As Deutsche Bank analyst Mark Wall so tactfully put it in his latest report on the situation, "The objective of the current round of decisions will be to 'kick the Greek can' beyond the German elections in September 2013".

So it seems to me that later, after the German elections are over, the fuller implications of this initial signal of "realism" can be fleshed out. By that point Greece’s crisis-weary population will surely be ready for neither another year of substantial austerity cuts, nor for yet another year of recession, so a solution will need to be found. Unemployment will likely be over 27% at that point, and with people possibly being asked to grin and bear a seventh year of recession, we may well be rapidly closing in on a "just how much of this can you really stand" type situation.

If the debt pardoning cannot be great enough then Grexit will be on the table as a contemplatable solution. As Citi analyst Giada Giani puts it in the their latest report, "even if a return to a semblance of sustainability is agreed for the Greek debt and the next bailout tranche is released, we doubt this will be the deal that fixes Greece once and for all. We think a Grexit scenario still has a 60% probability of occurring in the next 12-18 months."

Calm Before the Storm?

So, the Euro Crisis is going to be effectively put on the back burner over the next nine months or so, or at least that is the hope in Berlin. Naturally there are no shortage of loose cannons that can come into play to make this hope just another example of what Lagarde calls “wishful thinking”, but even assuming everyone gets the time-out people are hoping for, just what is going to happen when the German election milestone is passed? To the external observer, it does look like fund managers from across the planet are being told one thing (that Germany will then take the bold steps which are so evidently needed to shore up the common currency) while German voters will be voting in the exact opposite belief, even to the extent perhaps of being lead to think that the OMT bond buying programme is merely temporary. So someone is going to be very badly disappointed, and not long from now market participants will have to start placing their bets on who they think that someone is going to be.

But to return to where we started, just who was that fat lady, and what exactly did she sing? Well deeper investigation into the world of urban legends reveals that the woman in question is none other than Brünnhilde, shieldmaiden and valkyrie in Norse mythology, as well as heroine in Wagner's famed and fateful opera Götterdämmerung. As opera fans will remember, when the singing stops the world of Valhalla comes to an abrupt end, as Brünnhilde throws herself on a pre-prepared funeral pyre and in so doing initiates the final destruction the known world. Although the interpretation that this was some sort of "Freudian slip" for what the IMF boss actually fears could happen - namely the Greek Heracles might finally abandons his labours and descend into the nether world of Hades - is plausible and available, I prefer to think it was in fact a match of American football she had in mind. At least that way I sleep better.
Posted by Edward Hugh at 7:57 AM No comments: