Hopes that Europe's battered economies might be about to turn themselves around took another sharp knock today (Friday), as the preliminary flash reading on the purchasing manager survey signaled that activity in both the manufacturing and the services sectors are contracting at a new record pace in February. 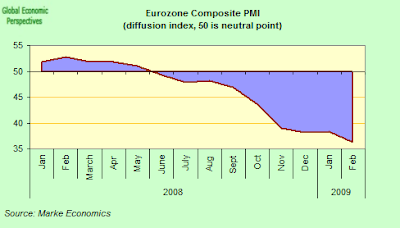 Barring some spectacular (and entirely improbable) turnaround in March it now seems likely that the Q1 GDP contraction will be worse than the Q4 2008 one. If we consider that the eurozone contracted by 0.2% in Q3 2008, and by 1.5% in Q4, then, in my humble opinion, the data we are seeing for this quarter are entirely consistent with a 2% quarterly contraction (or an annualised 8% rate of contraction). Not quite Japan territory yet, but not far behind. And for those who simply don't believe the PMIs can tell you so much, here is Markit's own chart, showing the strong underlying relationship between movements in GDP and the *flash* composite PMI. Pretty impressive I would say. 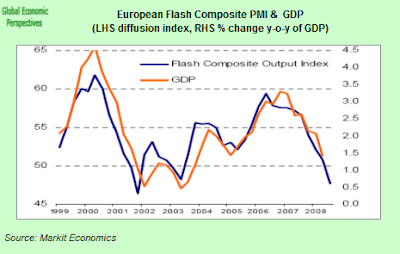 
The German service PMI came in at at 41.6, showing the fifth consecutive month of contraction. This was a sharp drop from last months 45.2 reading, and means that the recession is now feeding through from manufacturing to services. The difficult conditions have lead service business owners to hold to the grimmest outlook in the last decade, that is since the index was started. More ominously, the recent data points to a strong reduction in the employment level. 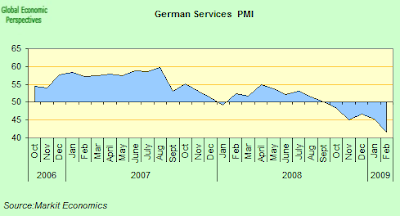 On the other hand February saw the tiniest of upticks in the manufacturing sector, since the PMI came in at 32.2, from January's 32 , the best that can be said here is that the rate of contraction may have stabilised. 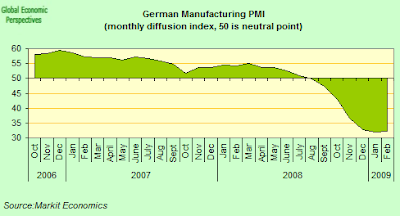 France Holds Up Slightly Better Than Most 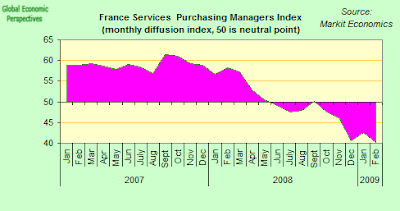 In France, the manufacturing sector (see chart below) gave up on most of January's rebound, and the PMI fell to 35.4 from 37.9 in January, while services (see chart above) slipped to a record low of 40.1 from 42.6 in January. Nonetheless France is visibly performing rather better than Germany, and when all this is over we will have plenty of time to hold the debate as to why that has been. 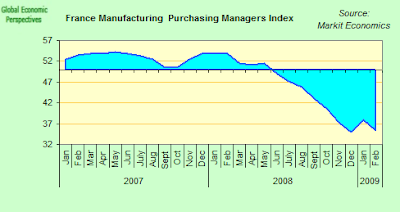 Posted by Edward Hugh at 5:20 AM No comments: